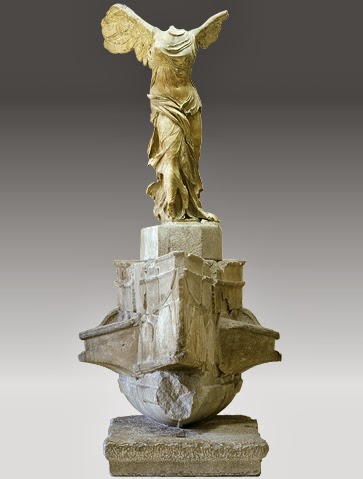 The Winged Victory of Samothrace is undergoing restoration at the Louvre Museum in Paris. The current word is that it will be unveiled sometime this summer.

The Winged Victory is a phenomenon of Hellenistic sculpture. The statue of a winged female figure—the messenger goddess Victory (Nike in Greek)—stands atop a base shaped like the prow of a ship. The monument measures just over 18 feet 3 in in height.

The monument was sculpted in the 2nd century BC in white Paros marble. It was created as an offering in the Sanctuary of the Great Gods on the island of Samothrace following a naval battle. Spreading her tremendous wings, the goddess announces the victory. The figure wears a sheer chiton and a cloak that swirls and falls in deep folds. The massive base and pedestal are sculpted from grey white-veined marble from the quarries of the island of Rhodes, a darker color that contrasts with the white marble of the statue. The incredible ingenuity in the construction of this masterpiece shows the artist to be of extraordinary talent.

The Victory was discovered in April 1863 by the French consul and amateur archaeologist Charles Champoiseau, who sent it to Paris in the same year. The monumental yet airy Daru staircase was built to link the Denon and Sully wings of the Louvre, and in 1884 the Winged Victory was positioned at the top landing and unveiled to the public.

For anyone interested in the process of restoring such an important antiquity, there is an interesting explanatory slideshow on the museum website.   The staircase will be under renovation until Spring of 2015.
Posted by Jane's Smart Art at 10:51 AM