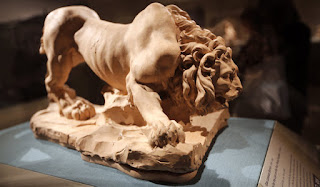 Among the fountains I’ll cover in Part 2 are Bernini’s Four Rivers and Il Moro in Piazza Navona, and Il Tritone in the Piazza Barberini, so it was fascinating to see the artist’s preliminary terracotta work for many of the marble figures in those fountains.

Bernini: Sculpting in Clay looks at how Bernini changed the face on Rome during the course of his long 17th century career. The show features 39 of Gian-Lorenzo Bernini’s 52 known works in clay, along with some 30 related sketches. Besides the fountain sculpture, the exhibit also considers much of his other sculptural work, including Blessed Ludovica Albertoni (Altieri Chapel, San Francesco a Ripa, Trastevere) and The Ecstasy of St Theresa (Cornaro Chapel, Santa Maria della Vittoria, Rome).

During the first stages of realizing a design, Bernini used clay to conceptualize his ideas, starting with very loosely worked bozzetti (from the Italian word abbozzare, “to sketch”). Once he’d achieved a design he was happy with he usually made a larger, more finished clay figure called a modello. He might show the modello to a patron or give it to an assistant to use as a guide for carving the much larger marble figure. In themselves Bernini’s modelli are awesome works of sculpture displaying a wealth of texture and details.

On the walls adjacent to the sketches on paper and the clay models are large pictures of the actual marble sculptures that resulted, providing real insight into Bernini’s artistic process from start to finish. 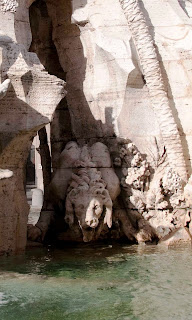 If you’ve seen Bernini’s Four Rivers Fountain (c.1650), you may remember the beautiful marble lion that emerges from a cavern in the rock to take a drink from the pool. Here was that lion, crouching as if to drink from a stream, modelled at half size. Even in clay, one can sense the power and alertness of the beast, despite the stillness of the moment.