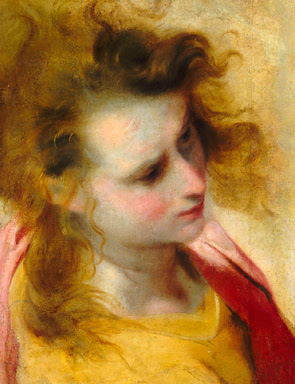 Apologies for the very poor quality of this image!  To better see this painting, go to Christie's website.

I was delighted this Fall to take a Renaissance art history course with Prof. Elizabeth Pilliod at Princeton’s Italian club. A very entertaining lecturer, Elizabeth is also the author of  Pontormo, Bronzino, and Allori: A Geneaologyof Florentine Art.

During our penultimate class she told us about having been asked by Christie’s to write a catalog entry about a Portrait of Francesco I de' Medici that was to go up for auction at their Old Masters and British Paintings Evening Sale in London on Dec. 4th.

Heretofore the painting had long been attributed only to an anonymous 16th century Florentine, but after doing some research, Elizabeth concluded that it was painted by FrancescoMorandini, called il Poppi (Poppi 1544-1597 Florence?). Morandini was a student of and collaborated with the artist and biographer, Giorgio Vasari (1511 – 1574).

I was fascinated to learn about Elizabeth’s research process and to hear that her attribution of the work to Morandini caused Christie’s to put aside their original sale estimate of around $25,000 in favor of a new estimate of $96,180 - $128,240! Brava!

I went straight home and looked up Christi’s sale catalog to read her essay. Really interesting stuff … right up my alley! Unfortunately, I’m not able to find the pre-sale catalog on-line anymore, but the article is reproduced in the Lot Notes, without the accompanying secondary images, which added dimension to the intriguing tale.

The sale took place during the ensuing week, and Elizabeth opened our last class by telling us the actual price realized … $253,015 … double the revised estimate ... and ten times the original estimate! Too bad she received a fixed fee for her work – as any honest professional art historian would – rather than a percentage!
Posted by Jane's Smart Art at 10:24 AM No comments: