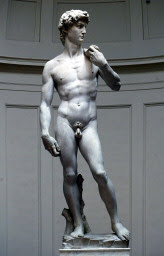 If you’ve ever battled the tourist crowds in Florence, and stood in line waiting to get into the Accademia to see Michelangelo’s magnificent David, you’ll understand at least part of the proposal being made by Tuscany's cultural chief, Paolo Cocchi, to move the statue to a new location some distance outside of the city center. He argues that moving David would ease tourist congestion in the historic center of Florence, and says, ''Keeping him in a museum where hundreds of tourists have to line a 45-cm wide pavement doesn't seem the best place for him''.

Opposition to the idea came fast and furious.

The idea of taking David out of his newly improved setting at the Galleria dell'Accademia elicited a quick response from the head of the city's museums, Cristina Acidini, who cited the millions of euros the city recently spent cleaning the statue and installing sophisticated anti-pollution systems to protect it.

According to LifeinItaly.com, “Officials at the Accademia stressed it would be 'extremely risky' to move the masterpiece out of the building that has been its home since 1873, when it was removed from its original position in front of Palazzo Vecchio.

“‘The home of David must be in the centre of Florence, for historical reasons,’ said Accademia director Franca Falletti. Branding Cocchi's suggestion ‘absolutely out of the question,’ she recalled the statue's fragility. An eight-month restoration to get it ready for its 500th birthday in 2004 revealed structural frailty, especially in the ankles, and the continuing impact on its surface of the bad air and street dirt brought in by millions of tourists.

“In the light of these risks, some art experts even suggested the statue should be moved to the Accademia's cellar.”

Fortunately, a less radical solution was implemented. Instead of being removed from public view, the David was placed behind an insulating barrier of circulating air, whereby streams of air protect it against the dust and particles which could further corrode its delicate surface. Special carpeting traps dirt as visitors approach the sculpture.

Given the cultural, historical, and conservation issues that are being raised in opposition to Cocchi’s proposal, my guess is that people wanting to see David century from now will still inch along, single-file, on the same narrow sidewalk as they do today.
Posted by Jane's Smart Art at 6:45 PM No comments: