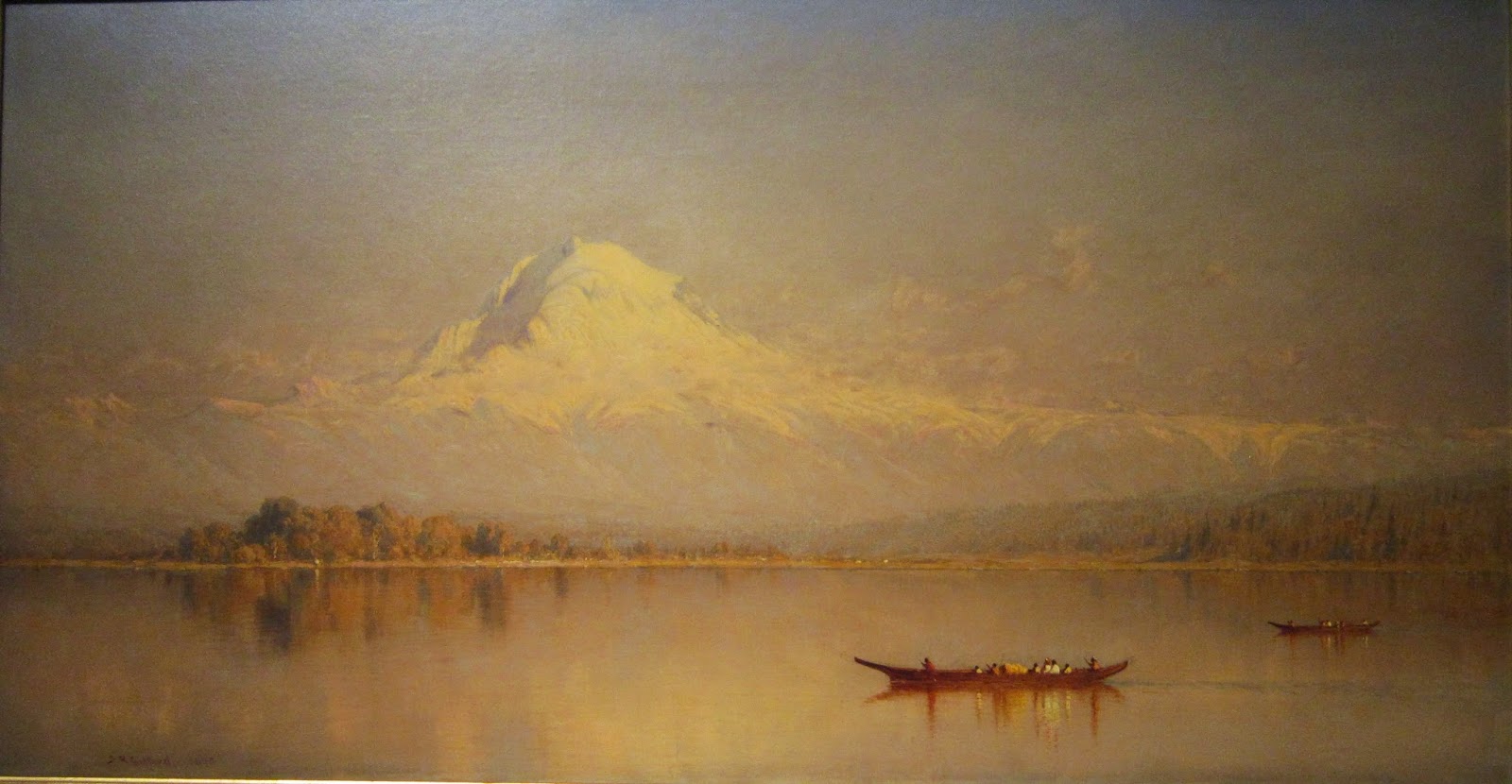 Our recent trip to the Pacific Northwest of course included a visit to the Seattle Art Museum where I was happy to see this landscape by one of my favorite 19th-century American landscape artists, Sanford Robinson Gifford.
The label adjacent to the picture says this:

In the summer of 1874 … Gifford travelled the length of Puget Sound and was able to see the great domes of the Cascades.  The appearance of the ethereal-seeming, majestic Mt Rainier on an August afternoon clearly enchanted him.  He thrilled to the particular spirit of this place of grand volcanic peaks and ancient peoples, where, at times, when the skies clear and Rainier emerges out of the mist, we are granted the privelege of glimpsing what seems the heavenly home of the gods.

Gifford grew up in Hudson, New York, the son of an iron foundry owner. He attended Brown University briefly but dropped out to study art in New York City in the mid-1840s. He exhibited his first landscape at the National Academy of Design in New York in 1847, was elected an associate in 1851, and an academician in 1854. When the Civil War broke out in 1861, he joined the Union Army and served as a corporal in the Seventh Regiment.

Like most Hudson River School artists, Gifford traveled extensively to find scenic landscapes to sketch and paint. In addition to exploring New England and upstate New York, Gifford travelled abroad. His first trip to Europe (1855-57) to study European art and sketch subjects for future paintings lasted more than two years.  Another venture abroad took him across Europe in 1868 and then to the Middle East, including Egypt, in 1869.

In the summer of the following year, Gifford journeyed to the Rocky Mountains in the western United States, at which time he produced the sketch of Mt. Rainier that resulted in the painting that now hangs in the Seattle Art Gallery. Like most of the Hudson River School artists, Gifford would first sketch rough, small works in oil paint from his sketchbook pencil drawings. Those scenes he most favored he then developed into small finished paintings, then into larger finished paintings.

Gifford referred to the best of his landscapes as his "chief pictures". Many of his chief pictures are characterized by a hazy atmosphere with soft, suffused sunlight. Mount Rainier, Bay of Tacoma – Puget Sound demonstrates this luminosity, as well as one of Gifford’s favorite compositional arrangements, wherein in the foreground he painted a body of water, in which the distant landscape is gently reflected.

On August 29, 1880, Gifford died in New York City of what is thought to have been malaria . In a testament to his stature, that autumn the Metropolitan Museum of Art in New York City celebrated his life with a memorial exhibition of 160 paintings. A catalog of his work published shortly after his death recorded in excess of 700 paintings produced during his career. At his death. His paintings were selling for about $300, give or take.  Recently, on Antiques Road Show, a small Gifford oil on canvas was valued at $300,000.