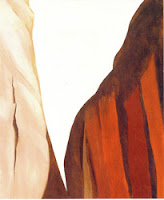 But wait ... she saw canyons even in Manhattan!
Posted by Jane's Smart Art at 5:35 PM No comments: 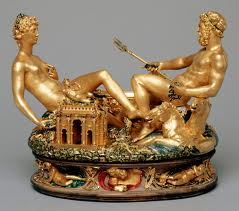 Incidentally, if you haven't read it already, I recommend the Autobiography of Benvenuto Cellini (1500-1571).
Posted by Jane's Smart Art at 7:24 AM No comments:

In November I blogged about the Bernini exhibit at the Metropolitan Museum and noted that the array of sketches, clay models and large scale images of the finished sculptures provided "real insight into Bernini’s artistic process from start to finish."

Last week, in writing about the Federico Barocci exhibit at London's National Gallery, I noted that alongside fourteen of his altarpieces and devotional paintings, numerous portraits, and a secular narrative painting, more than 65 preparatory drawings, pastel studies and oil sketches will be on view ... demonstrating "how Barocci’s pictures evolved, showcasing the fertility of his imagination and the diversity of his working methods." 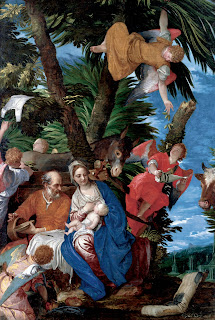 Now I've just learned about an exhibit of Paolo Veronese's work, at the John & Mable Ringling Museum in Sarasota (through April 14th). Virginia Brilliant, Associate Curator for European Art at the Ringling says that she has assembled sketches, completed drawings and the finished paintings to demonstrate "the whole story of how these masterpieces went from the artist's very first doodles -- his first ideas for a composition -- and how he worked those up in to very highly finished drawings" and finally into the sumptuous narrative paintings that he is known for.

Museums are trying to appeal to a broader audience, to attract people who say they don't go to museums because they "don't know anything about art". This type of instructive curatorial approach soothes the insecurities of art-novices.  And, frankly, it can enhance the experience even for those of us who do know something about art!
Posted by Jane's Smart Art at 3:09 PM No comments: