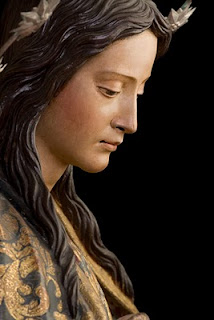 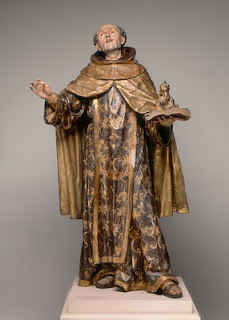 This painted and gilded lifesize wood figure, Saint John of the Cross, was carved by Francisco Antonio Gijón and painted, it's thought, by Domingo Mejías, c. 1675. Gijón was a sculptor from Seville who was known for his ability to carve dramatic works with intense expression. He was only 21 when he was awarded the commission for this sculpture and he completed it in about six weeks!

My work preparing me for the Caravaggio Pilgrimage in Rome has me immersed in the transition from Mannerism to Baroque. So I was delighted to learn of the Spanish Baroque exhibit that just opened in Washington DC.

Spanish Baroque art expressed the religious fervor of the Counter-Reformation in spades -- and some arrestingly real polychrome sculptures and paintings were produced.

About 20 Spanish masterpieces of the 17th century are now on view in a fabulous exhibition at the National Gallery of Art in Washington DC. The Sacred Made Real: Spanish Painting and Sculpture, 1600–1700 will showcase major paintings by Diego Velázquez, Francisco de Zurbarán, and Francisco Pacheco, as well as painted and gilded polychrome sculptures carved by Gregorio Fernández, Juan Martínez Montañés, and Pedro de Mena, among others.

The exhibition makes it possible to see the dynamic and intricate relationship between two-dimensional pictures on canvas and painted sculptures. Many of the sculptures have never been exhibited away from the Spanish churches, convents, and monasteries where they continue to be venerated by the Catholic faithful.

Posted by Jane's Smart Art at 7:03 AM No comments: