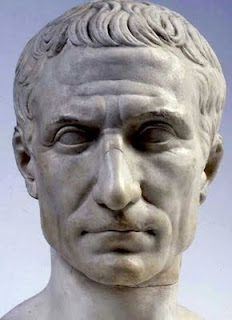 "Give us back our Apoxyomenos!"

I hate to have to edit this tidbit out of the script for my up-coming Jane's Smart Art audio guide to the Pantheon in Rome, but it's rather too much of a digression:
To celebrate their victory over Antony and Cleopatra at the Battle of Actium in 31 BC, Emperor Octavian Augustus' good friend and son-in-law, Agrippa, built the first public baths of Rome. To supply his magnificent new baths, Agrippa constructed a 14-mile long aqueduct to bring to Rome the pure water of the Aqua Virgo.
Pliny tells us that Agrippa’s baths were splendid in design and materials, and that they were decorated with fine statues, including the famous bronze Apoxyomenos by Lysippus (Ly-SIP-us) -- a beautiful figure of an Athlete in the Bath. Lysippus was Alexander the Great’s court sculptor in the 4th C BC.
Apoxyomenos means "The Scraper". It is a Classical Greek artistic convention for representing an athlete, caught in the familiar act of scraping his body with the small curved metal instrument that the Romans called a strigil. In the days before soap, perfumed oil was applied to the skin and then the strigil was used to scrape it off, drawing the dirt and sweat from the body along with the oil.

Tiberius, who followed Octavian Augustus as Emperor, moved the bronze statue to his palace for his personal enjoyment. But -- even though he replaced it with a marble copy -- the figure was so popular that the public outcry, "Give us back our Apoxyomenos", forced him to return the original to its place in front of the Baths complex.
An ancient copy in Pentelic marble — quite possibly the one Tiberius tried to substitute — is now in the Vatican. The supporting tree trunk behind the left leg seen in the Roman marble copy was not in the bronze original, which has been lost.
Posted by Jane's Smart Art at 12:59 PM No comments: