I wasn't able to upload this image on Dec 17th when I wrote about the discovery of Caravaggio's previously mis-attributed painting, an earlier version of The Kimbell's "The Cardsharps". Here it is. 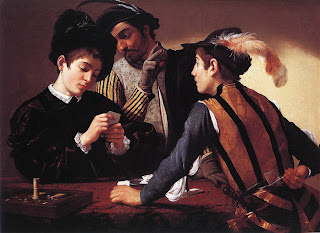 Posted by Jane's Smart Art at 1:30 PM No comments:

It was just over a year ago (Nov 14 , 2006) that two lost Fra Angelico panels were found hanging behind a bedroom door in a librarian's house. She'd bought them some years earlier for a few hundred dollars. Now comes word of the discovery of an undocumented painting by Caravaggio. The work, previously attributed to an anonymous follower of that artist, was bought by a British art historian for $100,000. He happened upon it while sitting in a restaurant, leafing through an auction catalog. A strong hunch that there might be more to it than previously thought, led him through the necessary steps to verify his initial intuition.
An article in the Associated Press recounts that analysis of the paint showed traces of very fine sand, which was a Caravaggio trademark, and that x-rays exposed detailed underlying sketching. According to an Italian art historian involved in the verification, “That's the ultimate proof. A copycat doesn’t do that.”
It is now believed that this work is a slightly earlier version of Caravaggio’s well-known painting "The Cardsharps" (1594) which can be seen at the Kimbell Art Museum in Fort Worth, Texas.
What other art wonders are just waiting to be found?