If It Has Function, Can It Be Art? 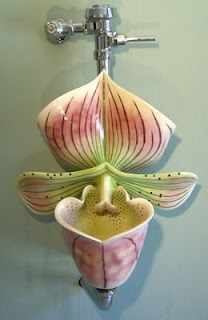 Some art theorists insist that art is made to be seen, not used. Essayist Siri Hustvedt is one of these. In her Mysteries of the Rectangle, she says that art "has not practical function beyond visual communication between the product the artist created and the viewer.”

I don't know what Hustvedt thinks about Fountain, but even if she agrees with me that Duchamp's urinal is not art, I suspect our reasoning might not be the same ... I disagree that functional things can't qualify as art.

Like Duchamp’s Dadaist Fountain, Sorensen’s Nature Calls urinals are also intended to be humorous and ironic. But unlike Duchamp, Soensen has created something original and unique, elevating the mundane into the realm of artistic expression.
Posted by Jane's Smart Art at 11:51 AM No comments: 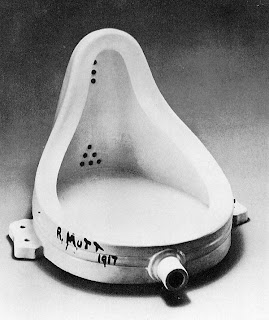 I don’t always succeed in appreciating a (so-called) work of art.

For example, I’ve never been able to appreciate Marcel Duchamp’s Fountain … which isn’t a fountain at all. It’s a urinal. And I’m not ashamed to say that I don’t “get” it, despite the fact that a poll of 500 art experts named it as the most influential work of modern art … ahead of works by Picasso and Matisse!

Duchamp's idea was that it’s the creative process that is the most important thing - that the work itself can be made of anything and can take any form.

Conceptually, I agree with that … but I can’t see that Duchamp actually created anything. What he did was purchase a factory-made product and hang it on a wall. And, indeed, when Duchamp shocked the art establishment in 1917, offering it for the first exhibition of the Society of Independent Artists in New York, Fountain was rejected for being neither original nor art.

Duchamp’s urinal is an example of Dadaism. According to its proponents, Dada was not art, it was "anti art", bent on rejecting traditional culture, and embracing chaos and irrationality. For everything that art stood for, Dada was to represent the opposite. Where art was concerned with long-established aesthetics, Dada ignored aesthetics. If art was to appeal to sensibilities, Dada was intended to offend. If art is a gift of the Universe, then Dada rejected the spirit of reciprocal generosity.

To my mind, even if American Dadism was driven by a sense of irony and humor, its negative purpose moves it out of the realm of art. Dadists themselves called it “anti-art”. How can something anti-art be art?
Posted by Jane's Smart Art at 8:55 AM 1 comment:


Following yesterday's posting, I remembered feeling that sense of gratitude to the Universe while looking at this sculpture in Our Lady Cathedral, in Antwerp, Belgium.

This sweet Madonna and Child was carved sometime before 1350, a gift from a long-dead, nameless artist – known to us today only as the Master of the Mosan Marble Madonnas. It's a gift that has kept on giving for almost 700 years!

The first time I saw it I knew very little about late medieval sculpture. But I was drawn instinctively to the expression of tenderness between this universal rendering of Mother and Child.

I was amazed that such grace and suppleness could be evoked in stone. The surface of the marble is so smooth and soft-looking, I wanted to reach out and stroke it.

It was only later that I learned that this sort of fluidity of pose and drapery, and the expressiveness in the baby’s playful gesture and the young Madonna’s affectionate gaze -- were extraordinary in a 14th century sculpture.

As a footnote: One might well wonder how this sculpture has remained almost completely undamaged for so long -- given that the cathedral stood central to Antwerp's tumultuous history (ie: religious iconoclasm, French revolution, world war). In fact, the statue is hollow, making it light-weight enough to be easily moved out of harm's way ... as oftern as might have been necessary!
Posted by Jane's Smart Art at 11:38 AM No comments:

Art as a Gift of the Universe

I haven’t posted for a rather long time because I’ve been busy pondering the meaning of life.

Actually, among the things I’ve been juggling is a treatise on the Art of Looking. As I’ve considered the subject, I’ve realized something quite fundamental about my approach to art:

I believe that a work of art is a gift of the Universe.

Here’s the spiritual logic: anything created by someone is an offering of a part of that person’s Being … an expression of the uniqueness of who that person is. We talk about a person as “gifted”. We refer to a person’s particular talent as “a gift from God”. We talk about gifts “coming from the heart”.

When a child gives us an off-kilter clay something-or-other, we are delighted … we recognize the care and concentration and the effort that went into it, and we receive it as a gift of that child’s Being … even while wondering what it is!

The extent to which you at least try to appreciate the work is an expression of your gratitude for the gift. It’s a reciprocal relationship. Taht may sound a little flaky … but so often when looking at an amazing work I feel a profound gratitude to the Universe that human beings are able to create such things.

Posted by Jane's Smart Art at 7:58 AM No comments: