Pope Descends into Chasm in the Earth 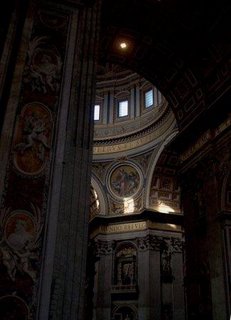 I've just come across something that I would definitely have included in the Jane's Smart Art Audio Guide to St. Peter's Basilica had I known it.

According to R.A. Scotti, in her recent book about the building of St. Peter's, Basilica, the trench excavated for the foundation of Bramante's enormous piers was 25 feet deep. Think about it ... dug by hand, the mucky soil drawn up from the depths, bucket load by bucket load ... a 25 foot deep trench running the circumference of each massive pier is a huge amount of earth-moving!

Scotti's description of the ceremony which was held at first light on April 18th, 1506, is delightful. She tells of a fierce wind whipping at the cardinals' crimson cassocks, and the bull-like figure of Pope Juilius II visible above the sea of humanity, tossing commemorative coins into the crowd as he was borne to the site, seated in a sedia gestatoria.

"Two masons descended first, followed by two cardinals, and then the pope, grim-faced. He climbed down the ladder carefully, his ringed fingers grasping the rungs, encumbered by the heavy clothing, the weighty tiara, descending lower, lower yet. The Ager Vaticanus was marshy, the earth in the pit damp, the air close."

"As Julius disappeared into the trough, the crowd pressed forward for a better view. Dirt flew, striking his tiara. For a terrifying moment he thought the sides would cave in and bury him. ... The trench was 'like a chasm in the earth,' the papal master of ceremonies, Paris de Grassis, recorded in his journal, 'and as there was much anxiety felt lest the ground should give way, Pope Julius thundered out to those above not to come to nearer the edge.'"

I love the visual image of this burly white-haired pontiff, larger-than-life and glorious in voluminous brocade, jewels a-glitter, descending gingerly into the muddy pit to lay the first stone in the foundation of what was to become, over the course of two centuries, one of the most remarkable achievements of the Renaissance.
Posted by Jane's Smart Art at 7:00 AM No comments:

One ought to be required to pass a test before being permitted to enter St. Mark's

Miss Julia Garnet's severe schoolmarmishness was overwhelmed by the mysteries and aesthetics of Venice. Nonetheless, stern criticism did still invade her new-found generosity of spirit from time to time:

"The Japanese were out in force again. A party stopped and aimed a bank of phallic cameras at Adam and Eve. No wonder they felt embarrassed in their nakedness. Julia turned aside in disgust. Really, she thought, it should be made difficult not more easy to get to places of beauty. One ought to be required to pass a test before being permitted to enter St. Mark's." 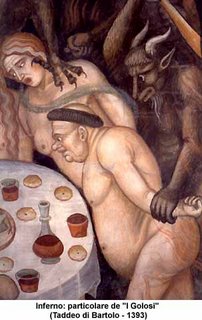 This passage evoked my own recollections of techno-buff tourists with their large-lensed digitals or purring video cameras. Yes, they are often Japanese - who do seem to travel in little swarms --but most any nationality can be substituted in this picture.

Julia's uncharitable thoughts about the Japanese in St. Mark's Basilica reminded me of an incident in the Duomo, called La Collegiata, in San Gimigniano. I had been standing for a long time, awe-struck, below Taddeo di Bartolo's Last Judgement, taking in the gruesomely graphic -- even pornographic, some might say -- portrayal of what the Damned have to look forward to on the day of judgment. Out of respect for some readers' sensibilities, by way of illustration I have chosen to show Gluttony, one of the tamer details of the fresco.

Despite knowing that the intent of the horrific scenes was to strike fear in the hearts of mortal Christians, I was startled to find such images in a church, and I stood crunching my neck in the dim light, trying to take it all in. Suddenly, a tall, lanky middle-aged American man was at my elbow. His video camera whirred softly as he panned down the length of the fresco, his voice reverently low as he recorded his caption, "This is another painting in another church in Italy."

Guessing that he had no idea what he'd just filmed, I resented the intrusion --- until I imagined him getting home and sitting Granny and the kids down to show them the video of his trip to Italy. SURPRISE! That brought tears of malicious mirth to my eyes! Just that morning I had been lamenting how crowded Europe has become, as great numbers of people from all over the world have gained the economic means to travel. If they travel because they are really interested, I thought, that's a good thing. But if they are simply accumulating bragging rights, adding one more place to the list of where they've been, then that's something else entirely! In retrospect, it was very Miss Garnet -- strict and uncharitable -- of me!

Miss Garnet's Angel by Salley Vickers would be a delightful book to read before your next trip to Venice. I suppose some might read it as a simple story of a spinster tuning in to Venice. But, as the layers are peeled back, there's a thought-provoking ethereal depth to it that I found intellectually gratifying.
Posted by Jane's Smart Art at 9:50 AM No comments:

Living in the moment with limoncello

We've just spent a couple of days mellowing out at a yoga retreat. On the drive home, I was thinking about the rather spartan, almost-vegetarian meals we'd been eating, and ... maybe I dozed off or something ... suddenly I found myself dreamily reliving meals I've had in Italy. Anything but spartan... and I've certainly never gone three days in Europe without a glass of wine!

Perhaps it was the retreat's ubiquitous jugs of water packed with lemon slices that made me think of limoncello. In Rome, we often stay in an apartment around the corner from Sta. Maria della Pace, and when we do, we frequent the little neighborhood osteria that's tucked in just steps from our 15thC doorway. (Osteria del Pegno, Vicollo Montevecchio,#8) The last time we stayed there we supped at del Pegno the night before our early morning departure for home. We had planned to eat and run, get packed and go to bed.

But that plan changed when we asked for the check. Instead of il conto, two frosty little glasses of limoncello were delivered to our table, compliments of the house. I suspect the waiter picked up on -- and disapproved of -- our haste, and this was his subtle way of making us slow down and live in the moment! And it did do just that ... we lingered over the tangy liqueur, then decided to take a leisurely dawdle around the neighborhood before going up to pack. We strolled over to the local alimentari and bought a bottle of limoncello to bring home with us, even though we seldom carry anything back that we know we can get here.

Anyway, having thought about this sweet experience yesterday, today quite coincidentally I came across an article about limoncello at the Dream of Italy website which, after providing some fascinating historical and cultural background, provides a recipe for concocting limoncello at home.

Well, I seem to have produced another food-related posting, with no mention of art and history ... I don't think referencing the history of limoncello really counts. I'll get back on track next time, I promise!
Posted by Jane's Smart Art at 2:20 PM No comments: