The point of iconography is to identify biblical and legendary characters in art. But for those of us who didn't a have a parochial education, raised with exposure to the stories of the saints, the age-old attributes of many biblical figures that we see in painting aren’t always all that helpful.

There are some telltale attributes that are always easy for me to recognize, like St. Peter with his key, St Paul with the sword of his martyrdom, St Catherine of Alexandria with a spiked wheel … but since I didn't grow up learning about the saints and their martyrdoms, there are very many that aren’t lodged in my long-term memory. I depend on my FlammarionIcnographic Guide to the Bible and the Saints.

As the patron saint of travellers, St Christopher is perhaps one of the most widely-recognized:  identified in art as an outsized man carrying an small child on his shoulder. The iconography stems from the legend, popularized in the 13th century, in which a Canaanite named Reprobus, who was 5 cubits (7.5 feet) tall, decided to seek out and serve "the greatest king there was".  After attaching to two or three kings who proved themselves to not be the greatest, Reprobus met a hermit who instructed him in the Christian faith and suggested that because of his size and strength he could serve Christ by assisting people to cross a dangerous river.

Soon after Reprobus began providing this service, a small child asked him to carry him across the river. During the crossing, the river became swollen and the child became increasingly heavy, so much that Christopher could scarcely carry him. When he finally reached the other side, he said to the child: "You have put me in the greatest danger. I do not think the whole world could have been as heavy on my shoulders as you were." The child replied: "You had on your shoulders not only the whole world but Him who made it. I am Christ your king, whom you are serving by this work." The child then vanished.

The legend tells us that henceforth Reprobus was known as Christopher, meaning "Christ-bearer".  Wikipedia has an interesting entry about the historical figure – a soldier in a Roman military cohort in Northern Africa – who may have been merged into this legend. 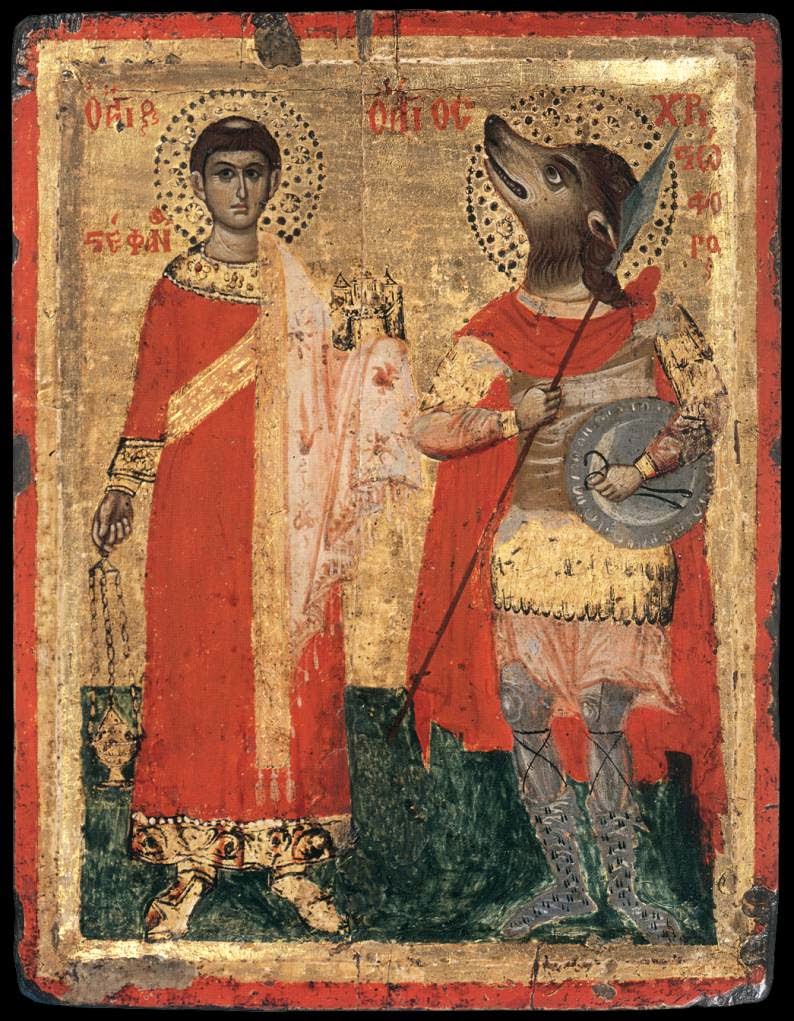 Today I came across a figure identified as St. Christopher … dressed as a Roman soldier with the head of a dog atop his neck … with no sign of a river and no child perched on his shoulder. Misattribution was unlikely: painted on the panel adjacent to the figure’s halo, clear as day (?!), it says Ἅγιος Χριστόφορος, Greek for St. Christopher.

Uh oh. My RC-centric Flammarion Guide says nothing about a dog-headed (cynocephalic) Christopher.

But a little delving led me to the website of the Museum of Russian Iconography in Clinton MA. The museum has recently acquired this miniature icon depicting St. Christopher with a dog's head, wearing gilded armor and a red cape. Scholars believe that the Latin words for Canaanite (Cananeus) and "dog-like" (canineus) may have been confused in early translations, making St Christopher a fearsome warrior for the Christian faith. While the dog-headed legionnaire iconography became standard in the art of the Eastern Orthodox church, it never took hold in the Roman Catholic west, replaced by the Christ-bearer image.

To the right is an extremely rare icon in which East meets West, showing a dog-headed St. Christopher bearing Christ on his shoulder.

Incidentally, in the museum's miniature icon (shown above), the figure with the cynocephalic Christopher is identified as St. Stephen. Stephen was a deacon who was expelled from town and stoned to death. Here is wears his usual dalmatic and stole, but the expected stones of his martyrdom are missing. In their stead he holds a censer and a model of a fortified town ... unusual attributes in my experience.  More delving required ...!