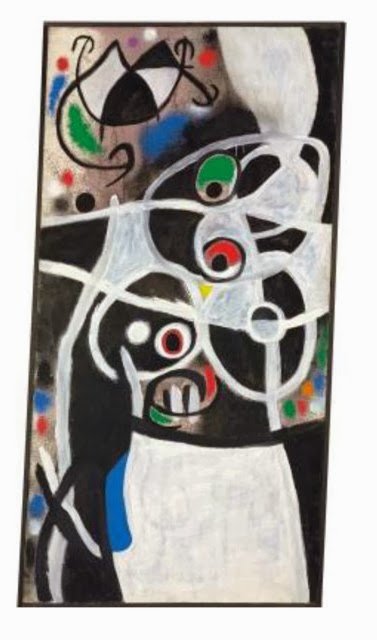 In 2008, when the government of Portugal nationalized the BPN Bank it inherited a huge debt as well as a large collection of paintings by Catalan artist Joan Miro.  Now Portugal wants to sell the 85 Miro paintings, valued at more than 36 million euros.

"It is important to sell these works to reduce the inherited debt of BPN which is more than four billion euro," said Secretary of State for Culture Jorge Barreto Xavier. Although the Portuguese government is strapped for cash these days, this seems to me like a drop in the bucket. I wonder if they are being short-sighted, giving up such a notable collection.

Apparently there is a contingent in Portugal who also question the wisdom of the sale.

Although a Portuguese court yesterday rejected a request from the opposition Socialist party for the sale to be halted, hours before the first batch of the paintings was due to go up for sale, Christie's cancelled the auction, saying, “While the recent injunction to stop the sale was not granted, the legal uncertainties created by this ongoing dispute mean that we are not able to safely offer the works for sale.”

It’ll be interesting to see where this ends up … the Joan Miros dispersed, many absorbed into private collections? Or, gracing the walls of one of Lisbon’s art museums?  Or how about a travelling special exhibit of the 85 works while the matter is being endlessly debated?

Femmes et oiseaux, an oil on canvas painted on 3 January 1968, illustrates one of the most enduring and characteristic themes in Joan Miró’s oeuvre: women and birds. Estimate: £4-7 million.


More Information: http://artdaily.com/news/67960/Christie-s-cancels-sale-of-collection-of-85-works-by-Joan-Miro-over-Portugal-dispute-[/url]
Copyright © artdaily.org
Femmes et oiseaux, an oil on canvas painted on 3 January 1968, illustrates one of the most enduring and characteristic themes in Joan Miró’s oeuvre: women and birds. Estimate: £4-7 million.