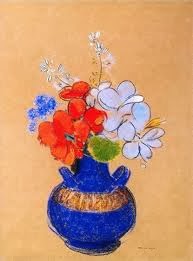 The work of Odilon Redon (b. 1840 Bordeaux, d. 1916 Paris) can be roughly divided into two long phases: the “black period” of his early work and the “polychrome period” of his later years.

From about 1870 to 1890 Redon created a considerable number of dark drawings in charcoal, known as Noirs. These depictions of ghostly apparitions and fantastic creatures express his fascination with occult, eerie, and enigmatic phenomena.

However, Redon's re-evaluation of color in 1889-90 marked a turning point in his career … and in my ability to appreciate his art.

Redon was active at the turn of  the 19th to 20th century, in the nascent years of modernism. One of the main protagonists of French Symbolism, Redon purposely turned away from the “superficial” imitation of nature practiced by the Impressionists. Sculptor Aristide Maillol noted that, “Redon did a great deal for young artists. He showed them the way.” Many artists of the post-impressionist generation saw Redon as a model. 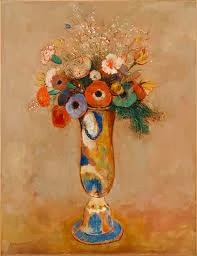 He became known as a sumptuous colourist; Henri Matisse was influenced by Redon’s expressive palette, a fact which we see manifested in Matisse’s own paintings. He was held in high esteen by contemporaries like Cézanne and Gauguin.

In the famous bouquets of the late phase, brilliant-hued flowers of various sorts are loosely arranged into rich bunches, springing from the vase in a joyous eruption of color and form. Redon transformed proliferating blossoms into a virtual homage to painting: “Art”, Redon once said,” is like a flower which opens freely, outside of all rules....”

February 2 - May 18, 2014
Fondation Bayeler, Basel, Switzerland
Paintings, pastels, drawings, and lithographs borrowed from major museums and private collections worldwide
The exhibition concentrates on Redon’s significance as a forerunner of classical modernism and highlights the avant-garde aspect of his art.