VENICE - Spanish architect Santiago Calatrava’s new Venetian bridge has been taking a beating from the critics. Focusing largely on its high cost, the local government has decided not to officially inaugurate it on September 18 as planned. 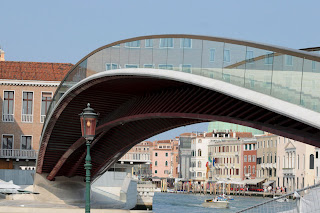 The first bridge constructed in Venice in 125 years, it connects the train station to the vehicular area of Piazzale Roma. It represents a decided break with the traditional architecture of the city.

An exquisitely historic thoroughfare, the the Grand Canal is lined with ancient palaces. Among them are the Ca’ Rezzonico, Ca’ d’Oro, Ca’ Foscari, Palazzo Barbarigo and the Palazzo Venier dei Leoni, which houses the Peggy Guggenheim Collection. The churches along the canal include the basilica of Santa Maria della Salute. Centuries-old tradition such as the Historical Regatta take place every year along the Canal.

The famous stone Rialto Bridge that stands today was built in 1591, but was preceded by, first, a pontoon bridge erected in 1181, then a timber bridge built in 1255. For centuries this was the only bridge crossing over the Grand Canal. In the 1800s two more bridges, the Ponte degli Scalzi and the Ponte dell’Accademia, were built. There’s a nice little history of the Rialto Bridge on Wikipedia.

During the long period of construction, Calatrava's bridge project went though numerous structural changes because of the mechanical instability of the structure, and the excessive weight of the bridge which would cause the bank of the canal to fail. Over 10 years the project was inspected by at least eight different consultants, and the cost grew to more than three times original projections.

Santiago Calatrava Valls (b 1951) is an internationally recognized, award-winning Spanish architect, sculptor and structural engineer. His early career was dedicated largely to bridges and train stations, and his style has been heralded as bridging the division between structural engineering and architecture. Calatrava is currently designing the future train station at Ground Zero in New York City. He has also designed three bridges that will eventually span the Trinity River in Dallas. Construction of the first bridge, named after donor Margaret Hunt Hill, has been repeatedly delayed due to – once again — high costs. If and when completed, Dallas will join the Dutch county of Haarlemmermeer in having three Calatrava bridges.

People should read this.