Beauty ... a path toward the transcendent 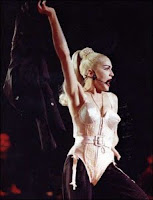 Pope Benedict believes that art can be used to overcome the complacent secularity of today’s western culture. To understand this view, think of Fra Angelico’s 15th century Madonnas. Then think about our 20th century Madonna.

Last Saturday, the Pope spoke to more than 250 of today’s leading painters, sculptors, architects, poets and directors, gathered in the Sistine Chapel. According to artdaily.org, he told the artists that he wanted to "renew the Church's friendship with the world of art." 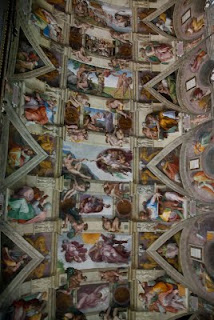 He told them that, in a world lacking in hope, with increasing signs of aggression and despair, there was an ever greater need for a return to spirituality in art. "Too often”, he said... “the beauty thrust upon us is illusory and deceitful ... it imprisons man within himself and further enslaves him, depriving him of hope and joy."

Enjoined by the Pope, seated beneath Michelangelo’s profound 15th century Genesis ceiling, facing his Last Judgment, I have to imagine that at least some of those present were stirred by spiritual inspiration!
Posted by Jane's Smart Art at 10:33 AM