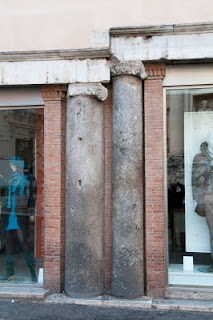 Just back from Rome. Glad to be home, but ... ah, Rome.
I continue to be fascinated by the visual cues to its history ... if you just know what to look for.

One thing I'd never noticed before, something I think almost everyone misses, in the Piazza di Trevi: 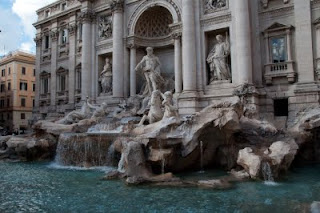 When facing the fountain, one's back is to an enclosed medieval portico. But if you turn around and give it a careful look, the distinct lack of symmetry in the facade gives clues to its story.

The original open portico was built in the late 13th/early 14th century, functioning as a sheltered extension of the piazza. It was enclosed in the late 17th century because it was thought to constitute a public nuisance ... its shadowy recesses providing cover for unsavory types bent on committing unsavory acts.

The portico was built with materials pilfered/salvaged from ancient structures. Use of granite columns and Ionic capitals of different sizes meant that the short entablatures had to be set in at different heights. Because of the scale differences, the spacing between the columns is uneven. 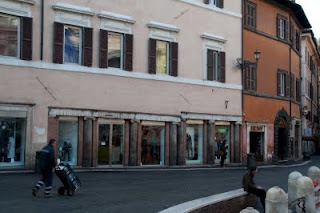 As a result of a 17th C renovation, the windows of the apartments on the floors above are placed somewhat symmetrically in relation to each other -- but there was no way to line them up with the irregular colonnade below.

Nonetheless, despite this visual dissonance, flying in the face of all that is architecturally holy, the facade has a charming stability. It will be still standing long after I'm not!

I enjoyed your art info story on Rome and Paris two of everybodies favorite places.. post some more..I like ray