It’s been 7 years since the Taliban blew up two ancient colossal Buddha statues in the Afghan region of Bamiyan. What wasn’t widely reported at the time was that behind the statues were caves -- decorated with precious paintings from 5th to 9th century A.D. -- which also suffered damage.

According to ArtDaily Newsletter, the paintings are probably the work of artists who traveled on the Silk Road, the ancient trade route between China and the West, across Central Asia's desert. 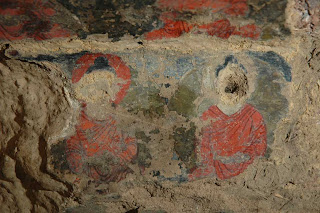 Now a World Heritage site, thanks to UNESCO support for a conservation project, the Bamiyan paintings have recently become the source of a major discovery for art historians.

Painted in the mid-7th century A.D., the murals show scenes with Buddhas in vermilion robes sitting cross-legged amid palm leaves and mythical creatures. As a result of experiments performed at the European Synchrotron Radiation Facility (ESRF), the scientists discovered that 12 out of the 50 caves were painted with oil painting technique, using perhaps walnut and poppy seed oils.

The Bamiyan cave murals predate by hundreds of years the first documented use of oil paint in Europe. Art history books have long proposed that oil painting was invented in 15th century Europe. 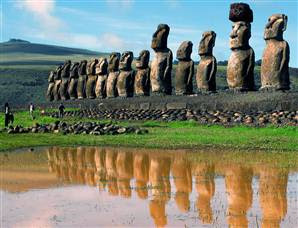 There are nearly 900 moai on Easter Island, in various stages of construction, some of them more than 33ft tall and weighing more than 80 tons. The statues are believed to be up to 1,000 years old, representing Polynesian ancestors. Rapa Nui National Park, in which the moai are situated, became a UNESCO World Heritage Site in 1995.

My reaction to the Taliban’s desecration was utter shock … and disbelief that people can be so full of hatred. My reaction to the Finnish fool’s desecration was a flare-up of anger … and disbelief that a person can be so selfish and ignorant. Was he drunk? Showing off? Or was he just arrogant and self-centered? When the vandal broke the earlobe off, it fell to the ground and shattered into small pieces, which he then attempted to steal. His spokeswoman said, "He really didn't realize the magnitude of his actions. We all make mistakes in our lives, and this was his mistake." And what a whopper is was!

In the end … is there any difference between the politically-motivated destruction of antiquities and that inspired by individual stupidity? The damage is done.
Posted by Jane's Smart Art at 9:16 AM