The Return of Samson & Delilah 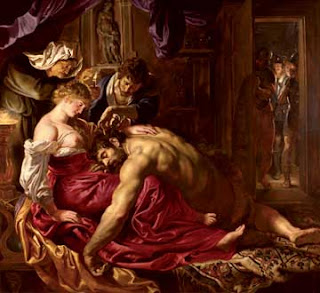 Not long after his return from Italy in 1608, Rubens was commissioned to paint a Samson and Delilah for Nicolaas Rockox. Rockox was a wealthy and influential Antwerp burgher who was a great friend to Rubens and who become one of his greatest patrons.

If you've listened to my Jane's Smart Art audio guide to Antwerp Cathedral, you know that Rockox had a hand in commissioning Rubens to paint the magnificent Arquebusiers' Guild altarpiece, The Descent From the Cross -- for which Rubens expressed his appreciation by including a portrait of his friend on one of the side panels.

And if you've seen the Descent, you'll recognize the old woman who here peers over Delilah's shoulder. Rubens often repeated certain figural types that he'd used successfully in previous works ... which was one way he was able to be so prolific.

Although we're not told how it came to pass, The Art Newspaper tells us that, from 1700 until 1880, the Samson and Delilah was in the collection of the Prince of Liechtenstein, and then was sold to the National Gallery, London. The "return" of the title refers to the loan of the painting to the now-closed exhibition in Rockoxhuis, Antwerp, as well as to its appearance at the Palais Liechtenstein where it is now being shown (through 25 May, 2008) along with other works collected by Rockox.

I'd say this is a "don't miss" opportunity if you find yourself anywhere near Vienna in the next three months.
Posted by Jane's Smart Art at 3:22 PM