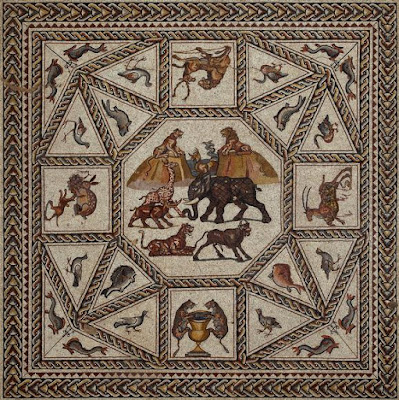 At the FrostArt Museum at FIU in Miami, Florida, through May 15, 2016, is an opportunity to see an extraordinarily well-preserved 3rd century floor mosaic: Predators and Prey: A Roman Mosaic from Lod, Israel. Adding to its interest value is that it holds an unresolved mystery:  Why are there no deities or human beings portrayed, among the menagerie of exotic animals? This is extremely rare for such a large floor mosaic from the time period.

The Lod Mosaic dates to when the town of Lod was a part of the Roman Empire. The amazingly detailed mosaic is thought to have been the floor of a large audience room, in a sumptuous villa owned by a Roman merchant whose trade route crossed between Jerusalem and the Mediterranean. The town of Lod stands on the site of the ancient city of Lydda, which developed in a fertile plain on an important trade route, the Via Maris, from Egypt to Syria and Mesopotamia. As this mosaic attests, it was a center of culture and craft production. 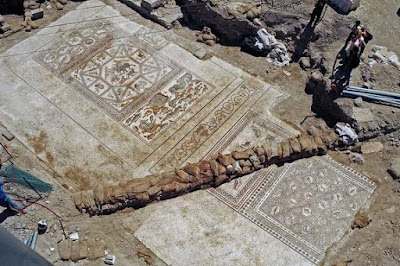 Archaeologists have calculated that more than two million tesserae (mosaic tiles) were used to create the 1,700-year-old masterwork. Three panels from the excavation are included in the exhibition, two rectangular end-panels surrounding a large square central medallion. Featured are indigenous animals coexisting with ferocious wild creatures such as lions and tigers (oh my!), an elephant and a giraffe, and Asian water buffalo, plus marine life, a sea monster and merchant ships.

Learn more about the Lod Mosaic at http://lodmosaic.org/home.html