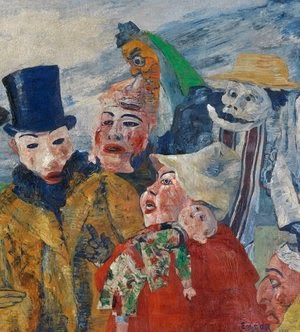 Eight newly-opened exhibits that may be of interest:


New Haven, CT  /   Feb 15 – May 11, 2014
Fame and Friendship: Pope, Roubiliac, and the Portrait Bust in Eighteenth-Century Britain
At the Yale Center for British Art:  Paintings, sculptures, and materials that convey Alexander Pope’s celebrity status, highlighted by a series of eight busts by Louis François Roubiliac (1702-1762), the leading sculptor of the period.

New Haven, CT  /  Through March 28, 2014
Reliable Tension, or: How to Win a Conversation About Jasper Johns
At the Yale School of Art: exploring Jasper Johns’ impact on contemporary artists.


New York, NY  /  Feb 19 – May 18, 2014
Golden Visions of Densatil: A Tibetan Buddhist Monastery
At the Asia Society, the first exhibition to explore the history, iconography, and extraordinary artistic production associated with the central Tibetan Buddhist monastery that was destroyed during China’s Cultural Revolution.
Cleveland, OH  /  February 16 - May 11, 2014
Remaking Tradition: Modern Art of Japan from the Tokyo National Museum
At the Cleveland Museum of Art, fifty-five works of modern Japanese art from the late 19th and 20th centuries, in a range of media including painting, sculpture, tapestry, ceramics and calligraphy

At the National Gallery: paintings, drawings and prints by artists such as Hans Holbein the Younger, Albrecht Dürer and Lucas Cranach the Elder – examining the striking changes in the ways these works were perceived in their time, in the recent past, and how they are viewed today.

BASEL  /  February 16 – May 25, 2014
The Surprised Masks: James Ensor
KunstmuseumBasel:Paintings and drawings from the Royal Museum of Fine Arts Antwerp and Swiss collections


At the Moscow Museum of Modern Art (MMOMA) A catalogue in Russian and English “is planned for printing by the opening date of the exhibition” (we can only hope that it’s ready!)

Avoid disappointment in BELGIUM … note that The Royal Museum of Fine Arts Antwerp is closed for renovations for several years.