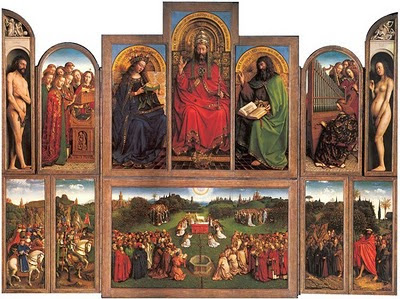 Visiting in Ghent will always remain a highlight among my art-viewing experiences: seeing Jan van Eyck’s monumental triptych (1432) in St. Bavo Cathedral, the location for which it was painted almost six centuries ago.
Generally known as "The Adoration of the Mystic Lamb" (the subject of its central panel) the altarpiece is considered to be the first major painting using oil-based pigments and the first major painting of the Renaissance; thus it is widely credited as the single most influential painting in the history of art.
From a visual perspective, one of the extraordinary aspects of it is that, despite its large size, every panel front and back, is painted with a level of detail that one expects only in very small paintings of the 15th century.
This explains, in part, why viewing the Ghent Altarpiece is fraught with crowds … even those casually interested in art are drawn in, lingering to study the details. But most visitors aren’t aware of another of the fascinating things about the triptych: that it has been the object of thirteen different crimes over the centuries, including seven separate thefts, most recently, in 1934.
“That year," Noah Charney tells us in his blog, "a single two-sided panel, depicting the so-called Righteous Judges (the panel on the bottom left corner when the altarpiece is open) was stolen from the cathedral of Saint Bavo. After months of frankly bizarre ransom negotiations, and the return of the back of the two-sided panel (the side depicting St. John the Baptist), the police closed the case. The case had been riddled with police incompetence and odd decisions that smacked to many of conspiracy — there were even whispers that members of the cathedral were involved in the theft and attempted ransom. …
In 1945, a Belgian conservator called Jef van der Veken, painted an identical replacement copy of the Righteous Judges and … the Belgian government installed the van der Veken copy in the original altarpiece in 1950. Therefore, what we see when we visit the Ghent Altarpiece is 11 out of 12 original panels, plus the replacement copy."
Charney’s blog goes on to describe an on-going element of mystery about the panel … linked to a suspicion that Van der Veken himself -- in addition to his role as the leading conservator of the Musee des Beaux-Arts in Brussels -- may have had a secret life as an art forger. One certainly has to wonder why he inscribed a poem on the back of the replacement panel which reads, translated from the Flemish: “"I did it for love/And for duty/And for vengeance/Sly strokes have not disappeared." Fascinating stuff! The stolen Righteous Judges panel is still missing. Although a creditable theory suggested that it was actually hidden right on the premises of Saint Bavo Cathedral, government-sponsored searches have come up empty.
Noah Charney’s new book tells the full saga. Stealing the Mystic Lamb: The True Story of the World's Most Coveted Masterpiece is high on my list of “must-reads”.
Posted by Jane's Smart Art at 10:54 AM

People had a lot of time on their hands back then, their artwork is so detailed

Ah, yes, what one can accomplish with no TV!