Michelangelo Behind A Sofa in Tonawanda? 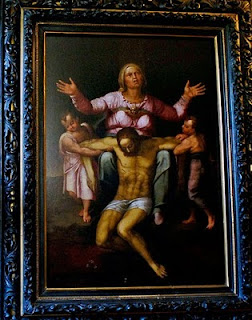 Not long ago there was a flurry of excitement about a newly-discovered Caravaggio painting, a finding that was quickly debunked. All it took was a few days for that claim to die quietly.

Now – in Tonawanda, NY of all places – comes the news that a Pieta, thought by its owner to have been painted by Michelangelo, has been kept in a portfolio behind a family’s sofa for 25 years. The painting was stowed away for safe-keeping after being accidentally knocked off the wall while being dusted!

The painting seems to have a verifiable provenance, going back to Vittoria Colonna, Michelangelo’s dear friend and sometime muse. Michelangelo would have been 70 years old when he painted the wood panel. It eventually found its way through marriage, via Croatia, to a German baroness who subsequently willed it to the current owner’s great-great-grandfather's sister-in-law.

In 2007, Italian art historian and restorer Antonio Forcellino began researching the painting. In an article published by the London Sunday Times two weeks ago, Forcellino said he was "breathless" when he saw it for the first time. "Only a genius could have painted this — the darkness which underscores the suffering, the Virgin who looks as if she's screaming and the figure of Christ after he has been deposed from the cross. ... It's definitely by Michelangelo, and I was lucky to find documents that prove it," said Forcellino. "The X-rays that have been done are the key". He has published a book about the painting which will be available in English next year.

Attribution acceptance in academic circles will take some time. After examining the painting, Michelangelo authority William E. Wallace, an art history professor at Washington University in St. Louis, expressed doubts, saying, "You can do scientific analysis of the paint and the surface and the panel and all that tells you is we're dealing with something old from the 16th century." Nonetheless, he did not rule out the possibility that it is the work of Michelangelo. And one way or the other, Wallace agrees that the painting's age and well-documented history make it deserving of display and scholarly debate about its origins.
Posted by Jane's Smart Art at 8:59 AM