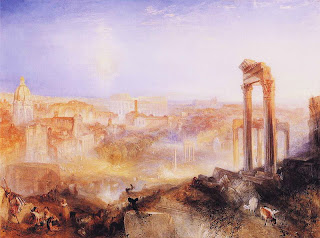 The painting is further distinguished by its immaculate condition.
Modern Rome - Campo Vaccino ("Cow Pasture") is a view of the un-excavated Roman Forum, bathed in hazy light. It is the last of Turner's 20-year series of views of the city. Turner painted it at the peak of his career, from studies and sketches he made on two visits to the city. The sun-washed panorama shows features of classical, renaissance and baroque Rome, but in the foreground we see livestock and herders, the activity of modern life. The painting shows the artist at the height of his technical powers and represents the culmination of Turner's fascination with Rome. Some consider Modern Rome - Campo Vaccino to be the finest among his many depictions of Italian cities.
The Getty now must apply for an export license, as the picture is considered part of Britain’s cultural heritage. It appears that this is a mere formality, although if someone in Britain were able to raise £30MM in the next three months, the decision might well go against export.
The headline of yesterday's Scotsman newspaper lamented, "£30m Scots Turner Painting Lost to Nation". The article points out that the "three-month 'export stop' would allow a potential UK buyer to match the price, but that 'no-one will have enough money to pay for it'". However a Sotheby's spokesman said the UK already has a large collection of Turners and that it is "important for the artist's international reputation that his works were able to be viewed around the world." He added that this case is "not in the same league as when a very great but very rare work of art is sold and by its loss we're impoverished."
I'm thrilled to think that Turner's Modern Rome - Campo Vaccino may be hanging at the Getty when I'm there in January!
Posted by Jane's Smart Art at 8:05 AM