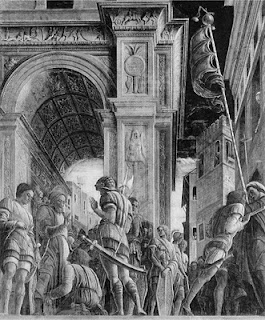 I only dream of traveling back in time when wishing I could have seen a particular work of art before its destruction. Today my time-travel destination would be late-15th century .

In those days, was an essential stop for travelers in the . A center of humanist culture and higher learning, Padua was home to Giotto’s Scrovegni Chapel, as well as the Ovetari Chapel of the Eremitani.

Located in the transept of the late-13th century church of the Augustinian Hermits, the cappella Ovetari was decorated with “must-see” frescoes painted by Andrea Mantegna (c.1431-1506), who was one of the most admired artists in .

Mantegna’s fresco cycle was the opening salvo of Renaissance painting in northern . It established the young artist’s reputation and had an immediate impact on his contemporaries. In fact, Mantegna’s Ovetari work continued to influence artists and to draw art-lovers to until an errant Allied bomb demolished the chapel during World War II.

The frescoes had aged badly; nonetheless, it was a tremendous loss.

Fortunately, from the beginning, the frescoes had inspired copyists (Musee Jacquemart-Andre, Paris), and in the 19th century a series of black and white photographs had been taken. Also -- by happy chance -- in the 1930s two of Mantegna’s scenes had been detached from the wall and removed from the chapel in order to conserve them. Little did anyone then imagine the historic extent of that conservation!

The chapel has since been reconstructed. Today the plain gothic architecture looks much as it first did to Mantegna and his co-workers -- with the exception of the two conserved Mantegna frescoes which are back in place, and the original terracotta altarpiece which was reassembled from fragments salvaged from the rubble.
Starting out on a team of seven artists, Mantegna was the only one left at the end of the nine-year project. It was Mantegna’s style that characterized the fresco cycle. Today nothing is to be seen on the left wall of his Episodes in the Life of St. James. 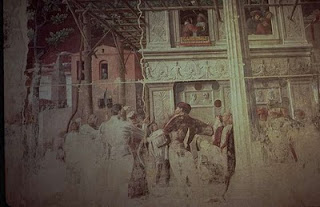 But on the right-hand wall, despite the ruinous condition of The Attempted Martyrdom of St. Christopher and The Beheading of St. Christopher, we see Mantegna’s magnificent classicizing marble architecture, teeming with ranks of precisely outlined figures, painted in the imposing Tuscan style that he had already absorbed by the time he was in his late teens. We see Mantegna’s novel treatment of perspective, and the way he lowered the viewpoint in order to enhance the monumentality of the composition.
And, it turns out that one day we may not have to depend on time-travel to see Mantegna's fresco cycle in situ. Since 2001, Italy's Istituto Centrale per il Restauro has been quetly working with tens of thousands of fragments (averaging 3 centimeters square), piecing the puzzle together. Over time, the wall paintings may gradually be recomposed ... a slowly-healing wound. All it will take is funding, patience and restorers' skill.
Posted by Jane's Smart Art at 2:19 PM