Quest and Quandary in Art Restoration 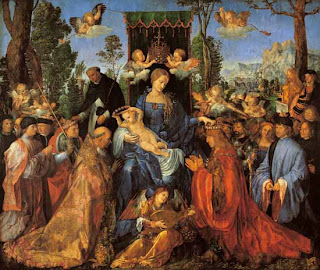 The mere suggestion that we might one day go to Prague started me poking around the web. (I'm always on the lookout for new Jane's Smart Art audio guide must-see sites!) I came across this ...

To help guide the restoration of the original Dürer altarpiece, The Feast of the Rose Garlands, the National Gallery in Prague is trying to track down an important lost copy.

The altarpiece was painted by Albrecht Dürer in 1506, during his stay in Venice, commissioned by German merchants for their chapel in the parish Church of San Bartolomeo. According to CultureKiosk, the patrons selected the theme: the painting depicts an ideal congregation of the Brotherhood of the Rosary. The Virgin with the Infant Christ, and Saint Dominic and angels dispense a symbolic blessing in the form of rose garlands. On the left are representatives of the clergy with the Pope at their head, while on the right representatives of secular power receive the blessing. Among these is a portrait the Holy Roman Emperor-in-waiting, Maximilian I. Undoubtedly the other figures portray prominent personages of the German colony in Venice. The man standing under a tree to the right is Dürer himself.

Dürer was proud of his achievement, writing to a friend in Nuremberg that "there is no better Madonna picture in the land than mine".

Considered a landmark work in the transition between the late Gothic and the Renaissance, contemporary writings tell us that the painting drew crowds of visitors from all over Europe. The Emperor Rudolf II was determined to acquire it at any cost.

The painting remained in the church in Venice for a century, until in 1606 when it was removed by Emperor Rudolph II for his art collection, and taken to Prague. The Durer was replaced by an Assumption of the Virgin painted by Johann Rottenhammer. But, before the Dürer altarpiece was removed, Rottenhammer painted a copy of it.

The original of The Feast of the Rose Garlands suffered a series of damages -- first while in Venice, then as it was carried over the Alps by four bearers, and yet again after its arrival in Prague. By the end of the 17th century, a considerable amount of the paint had been lost.

The Art Newspaper tells us that it was completely restored in 1841 by artist Johann Gruss. By modern standards his restoration was very crude -- for instance, he omitted a life-size trompe l'oeil fly which Dürer had painted on the Virgin's white drapery. A proper restoration must grapple with the difficult question as to whether there should be relatively minor conservation to remove the most glaring defects of the 1841 repainting, or a full restoration which would radically change the picture's appearance and return it closer to Dürer's original.

A very old black-and-white photograph of The Feast of the Rose Garlands exists, and there are several 17th-century copies, but the earliest and most accurate version is that by Rottenhammer. That copy originally went to the Palazzo Grimani in Venice, where it stayed until 1839. It then was sent to England where it was later purchased, in 1905, for £50, by the distinguished collector Herbert Cook. The picture was still in the Cook collection in 1945, which means that it was not looted on the continent during World War II, as some art historians had feared. It was later sold to a London-based gallery which has since closed. That's when the trail went cold.

Since it is known to have survived World War II, the chances of it being out there somewhere are very high. Check your attic!
Posted by Jane's Smart Art at 12:29 PM