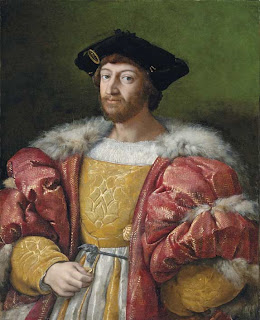 Speaking of Raphael – which I have been doing a lot in preparation for the release of our newest title, Raphael’s Stanza della Segnatura -- one of the few of his works that remain privately owned is is going up for auction at Christies in London on July 5th.
I do hope it will be acquired for a museum collection, rather than being snatched up by one of the world’s super-rich. But I fear that the cachet of owning one of the last privately-held Raphaels will send the bidding beyond the reach of museum budgets.
"The portrait shows a swagger Lorenzo de’ Medici standing proud and resplendent against a rich green background. In the Duke’s right hand he holds what is probably a portrait miniature showing his future wife."
The resplendent color, and the delicate treatment of the fur on his cape highlight Raphael’s exceptional ability and technique. This explains is reputation of ‘the Prince of Painters'.
The Medici gained great power through a series of appointments, conquests and strategic marriages. The second son of Lorenzo the Magnificent, Giovanni di Lorenzo de' Medici (1475-1521), was elected Pope Leo X in 1513. "Seeking to consolidate the position of the Medici family on an international stage, the Pope arranged for his nephew, Lorenzo, to be married to Madeleine de la Tour d’Auvergne, a cousin of Francois I, King of France. At the time, France was an important ally of the Vatican against the Holy Roman Empire."
"As neither the Duke nor the bride-to-be had met, an exchange of portraits was arranged in order that they could see what to expect. On 2 May 1518 the Duke was married in the château of Amboise in France. Returning to Florence with his bride, their entry to the city was celebrated with a banquet at which Raphael’s portrait of the Pope, now in the Uffizi, Florence, was exhibited. The couple had a child, Catherine de Medici, who went on to marry King Henry II of France, but less than a year after the marriage, the Duchess died. Lorenzo died soon afterwards in 1519."
Posted by Jane's Smart Art at 8:28 AM