Dog Drool on a DaVinci

Having just posted thoughts about restoration of paintings, I came across this tale of restoration woe in Artemisia, by Alexandra LaPierre, translated from the French by Liz Heron.

Background: By the 1620s, the Gonzaga dynasty in Mantua had declined from five consecutive generations of extremely refined art connoisseurship, combined with great wealth, to a series of disinterested Dukes who had no real interest in art and a desperate need for cash. The Spanish and French monarchs also coveted the Gonzaga collection, but it was the English King, Charles I, whose emissary carried away the hugely valuable art collection -- hundreds of antiquities, decorative artifacts and Renaissance paintings. 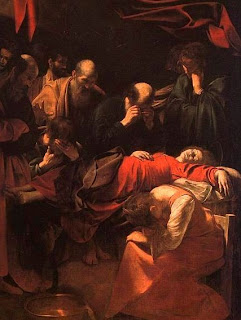 It was the celebrated collection of which Rubens had been curator for eight years, and it included, besides Caravaggio’s Death of the Virgin which is now in the Louvre, a Raphael Holy Family, Titian’s Entombment, and several dozen other paintings by the likes of Mantegna, Correggio, Giulio Romano and Leonardo da Vinci.

Having concluded the arduous, clandestine negotiations on behalf of his King, Nicholas Lanier packed the art works for transport to London. Knowing that the watercolors would not fare well on a sea voyage, he carried those with him on his overland journey. The rest was crated up and stowed aboard the Margaret –carefully segregated on one side of the hold, away from the sacks of grapes and barrels of mercury.

But Lanier hadn’t considered “the effects of heat and condensation on the sugar and the mercury in the hold.” Uncrating the artworks in England, Lanier discovered that the evaporating mercury had left a sticky layer of ink-colored quicksilver on the canvases, and had saturated the drawings.

A frenzied restoration effort ensued. Although Lanier was by now being castigated by the French and the Spanish (and by the Mantuan people who knew what they had lost) for having “stolen” the collection – having paid far below its market value – nonetheless a large hole had been made in the English Treasury to acquire these works. The King would not be pleased.

“But sponges soaked in milk or dog’s slaver – the customary methods – had not completely erased the ghastly overlay.” The most famous chemists in the realm suggested countless ineffective solutions. He swabbed the canvases with brandy. He dripped droplets of alcohol distilled from wine. Still a film remained. “Finally, he washed the finest canvases with plenty of water. Determination, luck and a mastery of the techniques of painting enabled him to restore some of the masterpieces. He enjoyed His Majesty’s favor more than ever.”

Imagine calling Fido over to drool on a DaVinci!
Posted by Jane's Smart Art at 8:41 AM