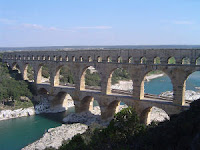 As isolated as it was then, these days the Pont du Gard attracts well over a million visitors a year! I am often struck by how hard it is for us to imagine the original context of historic sites while one's senses are being assaulted by the jostle of fellow tourists, the babel of languages, the din and smell of tour buses.
Parenthertically: This speaks to one of the benefits of audio guides: Headphones help blockout distracting sound, and an engaging narrator can bring the original context into the present, and convey the true meaning of the site.
According to Wikipedia, the Pont du Gard was designed to carry water across the small Gardon river valley. It was part of a nearly 50 km (31 mi) aqueduct that brought water from springs near Uzès to the Roman city of Nemausus (Nîmes). The full aqueduct had a gradient of 34 cm/km (1/3000), descending only 17 m vertically in its entire length and delivering 20,000 cubic meters (44 million gallons) of water daily. http://www.pontdugard.fr/index.php?langue=GB
How hard it is for us to apprehend the magnitude of the accomplishments of Roman engineers! The aqueduct was constructed entirely without the use of mortar, probably during the 1st Century. The stones – some of which weigh up to 6 tons – are held together with iron clamps.
And still it stands! In 1998 the Pont du Gard was hit by a major flood which caused widespread damage in the area. The road leading up to the bridge and neighboring structures were badly damaged, but the aqueduct itself was not seriously harmed.
Posted by Jane's Smart Art at 6:28 AM