Fra Angelico Hiding in the Bedroom! 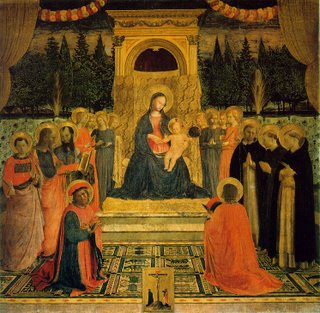 If you have a love for early Renaissance art -- perhaps Fra Angelico in particular -- (or if you're a fan of The Antiques Roadshow) the recent discovery of two Fra Angelico panels in a modest home in Oxford, England, should give you a little shiver of excitement!

The panels are recognized by art experts as being from the San Marco Altarpiece, painted by Fra Angelico, c. 1439, commissioned by Cosimo dei Medici. The central panel of the altarpiece is still at San Marco, but the smaller panels surrounding it were dismantled 200 years ago during Napoleon's occupation of Italy. Today most of these secondary panels can be seen in Museums scattered around the world. Some, however, remained unaccounted for, including these two. I wonder how many of these little treaures remain lost.

According to a Reuters report from London, two panels painted in tempera on a gold background, each showing a standing figure of a Dominican saint, were found tucked away behind a bedroom door by an art auctioneer who had been asked to carry out a valuation after the owner of the house died in July. The homeowner, a librarian, had retrieved the paintings from a box of odds and ends while working as a manuscript curator at a museum in Huntington, California, in the 1960s. Unaware that they were by Fra Angelico, she thought they were "quite nice" and persuaded her father to buy them for a few hundred pounds. Today, they are expected to bring more than a million pounds at auction.

"We are dealing with two works of art painted by one of the 'greats', intended for his own church and commissioned by one of the greatest art patrons in history," the auctioneer, Guy Schwinge, said in a statement. "It simply does not get much better than that."
Posted by Jane's Smart Art at 12:29 PM