Michelangelo's Battle of the Centaurs

In June I was in Florence to test the script for the new Jane's Smart Art Guide title, Fra Angelico: San Marco Florence, which will be available in late September. We stayed at the Hotel Orto dei Medici, near the Piazza San Marco where sits the Dominican convent-turned-museum that houses Fra Angelico's wonderful fresco cycle. Our room overlooked an enclosed courtyard that apparently was part of the Medici sculpture garden where Michelangelo was taught by Bertoldo, and carved his earliest works.

I returned home with a hankering to reread Irving Stone's The Agony and The Ecstasy, which I last read -- and loved -- at age 16.

Michelangelo was about that age in 1490 - 92, when -- while residing in the Medici household and working in that garden -- he created The Battle of the Centaurs (marble, 33 1/4 x 35 1/8 inches). Both his early biographers, Condivi and Vasari, wrote that this classical subject was suggested to him by the great humanist poet and scholar, Angelo Poliziano. This is certainly a credible claim, given that Poliziano had recently translated -- from the original Greek into Italian -- Ovid's Metamorphoses, a poetic recounting of Greek legend, in which was told Nestor's tale of the battle between the centaurs and Thessalians. 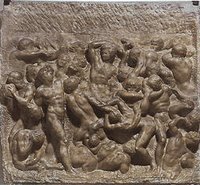 To celebrate the day, tables were set up
And couches placed for greater luxury
Beside them in a green, well-arboured grotto.
Among the guests were centaurs, rugged creatures
(Half horse, half man, conceived in clouds they say),
Myself, and noblemen of Thessaly ...

... Oh the bride was lovely!
Then we began to say how sweet the bride was
But our intentions began to bring ill fortune to the wedding.
Eurytus, craziest of rough-hewn centaurs,
Grew hot with wine, but when he saw the bride
Was that much hotter; tables were rocked,
Turned upside down, then tossed away.
Someone had seized the bride and mounted her.
It was Eurytus, while the other centaurs
Took women as they pleased, first come, first taken,
The scene was like the looting of a city ... "

Gaiety turned to mayhem ... joy to outrage ... pleasure to plunder. That context lifted my appreciation of this work to an entirely new plane, adding a dimension of emotional involvement with the subject and an understanding of the artist's intentions that was previously impossible.

Michelangelo's Battle of the Centaurs is on display at the Casa Buonarroti in Florence. The above quote is taken from H. Gregory's 1958 translation of Ovid's Metamophoses.
Posted by Jane's Smart Art at 11:34 AM